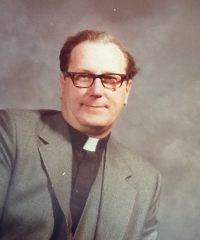 Father Bob was brought up in the Ottawa Valley region of Ontario.  Both his undergraduate and graduate studies were completed at the University of Bishop's College in Lennoxville, Quebec, where he was awarded a B.A. in 1956 and an L.S.T. in 1958.  Following this, he was ordained deacon, then priest, and served at a parish in St. Catharine's, Ontario. He later took a bachelor's degree in administration and finance at the University of Manitoba.

Shortly after his ordination, Father Bob married Lorna, and they have three grown children.

Father Bob has served in parishes in Edmonton, Winnipeg, Brandon, Kelowna, Nelson and Ottawa, and has held positions as Executive Assistant to the Bishop, Provincial Treasurer, Archdeacon, and Dean, and has also been a member of the General and Provincial Synods for many years.  He retired from the Diocese of Ottawa in 1998, and he and Lorna moved to Nanaimo.