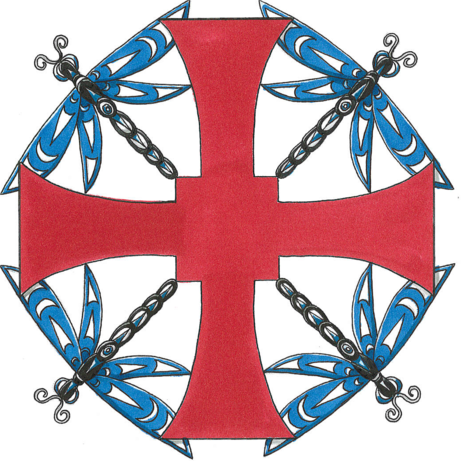 Parishioners Les Annesley and Blanche Gates were recently invested as members of the new diocesan Order "The Order of the Diocese of British Columbia". The first group of faithful volunteers from across the Diocese were invested by Bishop Logan McMenamie on Saturday, October 20, 2018 at Christ Church Cathedral.

What is the Purpose of the Order?

The purpose of the Order is to honour and give special recognition to members of the diocese (and in the case of honourary awards, those not part of the diocese) who have given outstanding service over a significant period of time in their baptismal ministry.

What is the Order Composed Of?

The insignia of the Order is based on the Badge of the Diocese of British Columbia. The Badge was granted by the Chief Herald of Canada in 2017 and is a combination of both original and new symbols of the diocese. The original part is the cross at its centre, which was part of the seal of the first bishop of the diocese, George Hills, and became part of the diocesan Coat of Arms granted in 1859. The new part is the dragonfly—a symbol that was adopted in 2015. As a diocese, we are seeking to be transformed as the body of Christ on these islands and inlets, shedding the colonial shackles of our past; those parts of our history when we did not live into God’s call to treat all peoples with dignity, respect and equality. For us, the dragonfly is a powerfully symbol of our commitment to allowing the Holy Spirit to work in and through us, in partnership with all peoples of these lands, to transform us and to create in us a clean heart and renew in us a right spirit as the people of Christ. The dragonfly used in this insignia was designed for the Chief Herald by Doug LaFortune of the Tsawout First Nation on the Saanich peninsula.